Meet Your President and VP

Meet Your President and VP!

CU Denver offers a plethora of resources to help students to feel supported and heard, and Student Government Association (SGA) is no exception. Comprised of student government officials elected by students (that’s you!), SGA is here to represent the voices of all students.

Juan Gonzalez and Morgan DeVito are the president and vice president for 2022-2023, and serve as the liaison between CU Denver professors, administration, and students by answering questions, responding to complaints, and providing information to all appropriate parties. 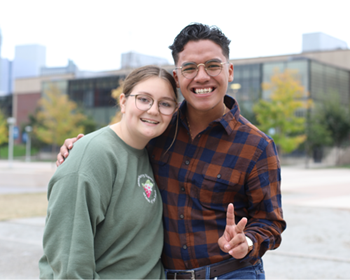 Even with the responsibility of being in SGA, Juan and Morgan are still students navigating CU Denver and Auraria campus just like everyone else.

For Juan, a typical day outside of SGA consists of also working at the Cherry Creek mall and studying in the Student Commons Building. Majoring in Political Science and minoring in Legal Studies, Juan said, “I have been part of this leadership journey since I was in middle school. Starting off with National Junior Honor Society, ending with FCCLA state officer by the end of my high school career. Senior year [of high school], I decided that I wanted to keep going—growing as a leader, but also continuing that journey of being an advocate for others.”

As for Morgan, her time is allotted to school, SGA, and her second job as a restaurant server. A Public Health major, Morgan explained, “I’ve switched to Public Health [from business] because I want to go into food safety regulation. Possible FDA, health department work. I just really enjoyed the policy side of that and the regulation aspect, which is why I joined SGA as well because it gives you that background knowledge.”

There is so much to love about being a Lynx, but for Juan and Morgan, there are specific things that come to mind that make them proud to represent CU Denver and its student body.

Morgan praised the diversity and open-mindedness of campus, admiring, “how willing they are to teach you about things.” She added, “It’s a great place for students to learn and experience life for the first time, away from their family members that maybe they have had that confirmation bias with their entire life. I just like being somewhere where it’s so inclusive.”

Learning as They Go

As SGA representatives, Juan and Morgan have learned a lot.

Recalling her early experiences with SGA, Morgan remembers, “When I first came into SGA, they put me on the Student Fee Review Committee. I didn’t know what that was, and most people don’t, but it showed me that we have an impact on tuition and fees and we have a voice in those—it’s not just a number they give us.”

Juan, who joined SGA during COVID, shared that he was surprised and impressed “by how we were still trying to do things while we were all remote.” He also learned that SGA is an advocate for the Wellness Center!

As CU Denver students, both have created great memories.

Juan said he really enjoyed the sexual education events promoted by SGA. “I think that's always going to be something SGA collaborates with that I'm very proud of. Just, in general, being open about sex, and practicing safe sex is something that I truly love. Cassandra does a really great job of explaining how to do all this stuff. I really enjoy the fact that we can get prizes, from stickers, to lube, to actual sex toys. Additionally, I love the Women and Gender Center. Coming from a Catholic background, contraceptives and sex were discouraged, and here it’s just like, ‘If you’re gonna do it, please be safe.’”

Morgan’s favorite memory at CU Denver came from being in a Core Composition class her freshman year. “Generally, I would categorize that as a really good experience because I was with people that were really nice to me, and I had a really supportive teacher. It was a class where they fostered a lot of community and inclusiveness. It was really eye-opening, but also just a place where I felt comfortable when I was in a really uncomfortable period in my life.”

This year is CU Denver’s 50th Anniversary, and it’s only the beginning. Juan and Morgan expressed their concerns and hopes for the future of the university.

“I truly get worried about gentrification of the campus a lot,” Morgan voiced. “They keep adding buildings—which is wonderful—but it takes away from the historic aspect of the campus, and I don't see that necessarily declining unless students kind of speak up about that. I also think there’s not gonna be a ton of green spaces.” 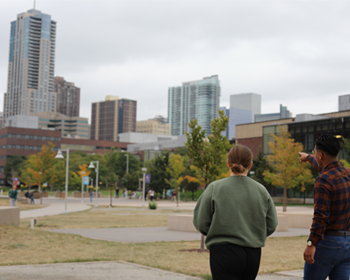 Juan echoed her sentiment, saying, “I hope that moving forward, we can have more trees, plant more, have rooftop gardens if we can. Be able to be eco-friendly and be able to maintain that properly.”

A few CU Denver buildings are LEED certified, but both the president and VP emphasized, “We can always do more.”

Both also expressed a hope for authenticity when promoting the campus’ diversity and excitement for a growing community.

Referring to the university’s strategic plan to be a university for life , Morgan said, “I think it's gonna be really interesting to see how you can just come back to this one place all the time. It already shows with the Career Center—they allow graduates to come back for career advising, which I think is wonderful.”

Have any ideas for SGA? Want your voice to be heard?

Juan reassures everyone, “Our doors are open. Even if our office is closed and locked, you can always contact us. Anything that comes up, please just let us know and we’ll try to help you in the best way we can.”