On Monday, June 20, OIT will begin uninstalling McAfee (the current antivirus software) and deploying Microsoft Defender for Endpoint on all Windows operating systems managed by the university.

Tableau Server Moves to UIS through a Collaborative Cross-campus Partnership

Tableau is a business intelligence platform that provides robust visual analytics tied to CU-Data and other data sources at CU to help make informed business and academic decisions.

The Tableau Enterprise Server project sought to maximize efficiencies and minimize costs by housing all Tableau projects in a centralized server, significantly reducing licensing fees by almost $1 million over five years and sharing the burden of user and license management with UIS. Having Tableau managed centrally also opened the door for increased data collaboration and analysis across campuses. HIPAA compliance was also activated on Tableau, helping to keep our patient data secure.

There were several project delays at the start of the project, caused by the need to hire a staff member in UIS to support the centralized Tableau server, and also to get HIPAA compliance in place. The delays meant that we had a condensed timeline to implement, as individual contracts were coming due the end of this year and the contract for the pricey migration tool UIS used to ensure accuracy would expire on December 31, 2021.

On the Denver | Anschutz campus, collaboration was key to ensuring our Tableau administrators were involved, our campuses’ needs were heard and that we ended on time. More than 20 Tableau administrators – including representatives from OIT, OIRE, HDC, SOM, College of Liberal Arts and Sciences (CLAS), Budget and Finance Offices and more – partnered on the project (see Tableau Collaborative Partnership of Technical Teams and Change Agents below). Meeting weekly (often multiple times per week) with the change agents from Boulder, PSC and the UIS implementation team, decisions were made about go-live dates, testing plans were agreed upon, issues were resolved, and communication timelines and methods were determined collectively.

What we are calling the “non-medical” sites – University, CLAS, Human Resources, Budget, etc. – went live on Tuesday, November 9. The SOM site (managed by the SOM IT team) and Health Data Compass both went live on Monday, November 15.

OIT played a large role in the successful rollout for our campuses. Vaughn Larsen, program director of identity management & middleware, was an involved and present sponsor and helped us resolve escalated requests and issues. On the current servers, Graham Gedeon, application administrator in constituent services, Rick Machado, senior data integrations engineer in data operations and data architecture (DODA), and Nicky Rucker, data operations and strategy program manager in DODA, are the primary support for our campuses’ servers. These team members’ knowledge of Tableau was critical to decision-making and successful testing. Steve Albrecht, senior systems administrator in DODA, quickly responded to deactivating the campus servers, and Gail Kinney, IT Professional in DODA, helped minimize confusion for our users about which server to use by setting up a web URL redirect. Finally, Sharon Grant, organizational change program manager in planning, strategy & analysis, helped coordinate and communicate with OIT, UIS and campus change leads.

The Tableau Server project is a prime example of how OIT brings value to our constituents and CU, facilitating bringing our cross-campus teams together to support each other and help drive a successful technology project outcome for our campuses.

Did you know that you have access to public data on Tableau? Log into the new server at https://viz.cu.edu/ and check out some campus analytics. Be sure you are connected to the network using VPN or directly! 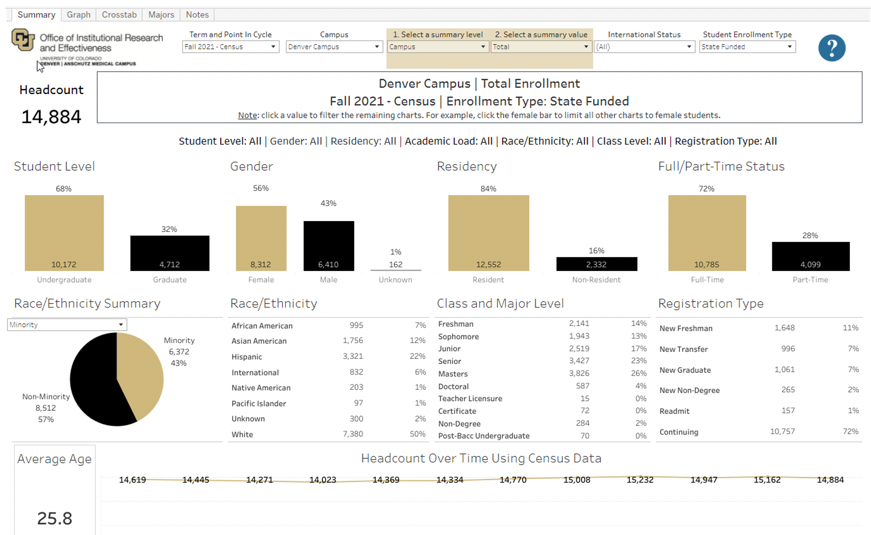 Submit a ticket or email