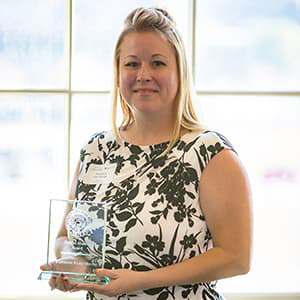 Stephanie studied human resources and business management at the Business School. She stepped into a leadership role while a student at CU Denver by reactivating the SHRM Student Chapter on campus and her leadership skills have followed her into her career where she is known for taking initiative.

Stephanie has led and organized a team in 2016 to volunteer with Extreme Community Makeover that brought roughly 25 volunteers together to clean up two blocks in an under-served neighborhood. In 2016, she started a nonprofit with fellow CU alumni to help victims of domestic violence. She has grown in her Human Resources role at Employer Essentials as the HR service manager for roughly 60 clients. She also works for thresholdHR as the Vice President of Operations assisting the owner with different HR projects. She is committed to giving back to the community and inspires others as well.