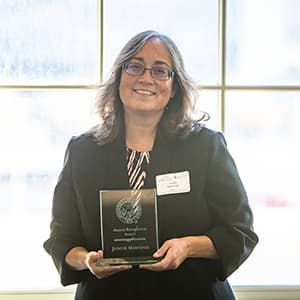 Judith Martinez studied history, ethnic studies, and sociology at the College of Liberal Arts and Sciences before completing her Master's in Urban and Regional Planning.  Serving the Colorado community for over 30 years in a variety of roles, she is dedicated to her community, and has a proven record of positive impact on the organizations she's worked with.

Prior to her current position at the Colorado Department of Education, she worked in the nonprofit sector for 23 years. Her nonprofit career began at Family and Community Education and Support (FACES) where Judith became the Deputy Director and worked to provide training in child development and home visitation programs that serviced underserved Spanish speaking populations. Under the FACES umbrella Judith served as the Founding Director of the National Center for School Engagement.

She served on the Denver Planning Board from 2005 – 2011 as a mayoral appointee. Currently, Judith works at the Department of Education as the Director of Dropout Prevention and Student Re-engagement.  She led the creation of the first Office of Dropout Prevention and her leadership has helped lead to a consecutive five-year decrease in state dropout rates and consecutive five-year increase in state graduation rates.
Categories: CAP |