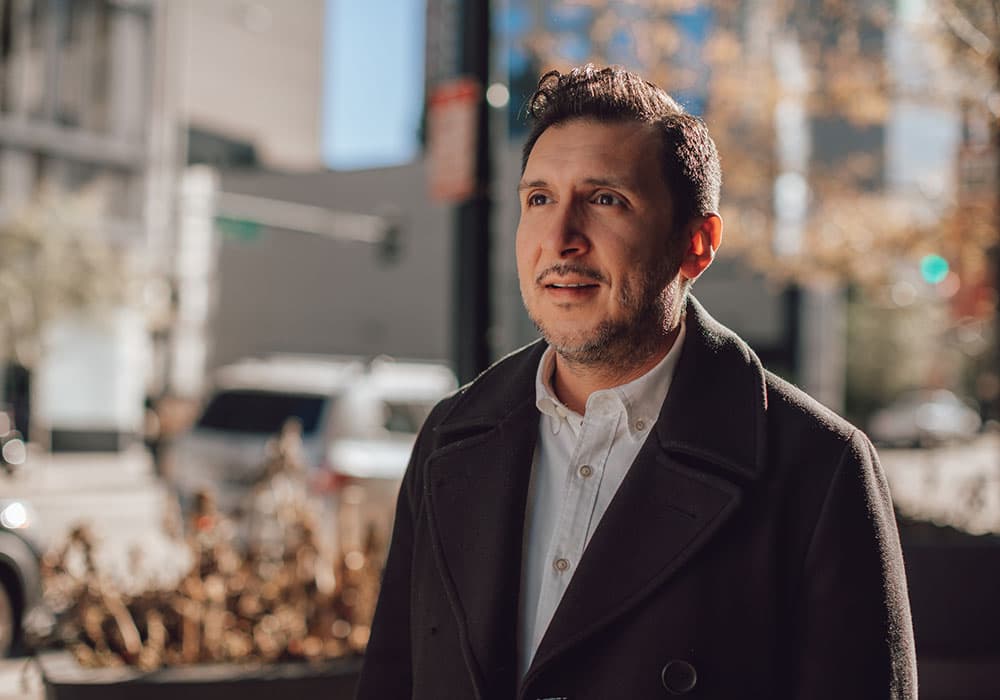 In his December 2020 commencement address, Colorado Supreme Court Justice Carlos A. Samour, Jr. ’87 told CU Denver graduates to “make a difference,” whether for an individual, for a group, or for society as a whole. Justice Samour, who fled El Savador as a child with his family, encouraged CU Denver’s newest alumni to leave the world a better place than they found it. When student David Olguin graduates in 2022, he plans to do just that.

David joined the CU Denver community as a transfer student in Fall 2020 with plans for a career that would help clear a path to education for Hispanic students–a path that once proved elusive in his own experience. While David felt at home among the large Hispanic community in his native Pueblo, CO, he found himself fitting in less when his family moved to Jefferson County. “I felt like I didn’t belong,” David explains. “My high school teachers didn’t care, and the institutions certainly didn’t have my best interests in mind.”

His fortunes shifted after high school when he discovered while working in retail that he had a knack for visual merchandising. David made his way to New York City, where he landed jobs with luxury brands Lacoste and Harry Winston. From his office overlooking Central Park, he created product presentations that appeared all over the world. “I worked hard and saw the world laid before me,” he says. But once again the tides turned when his mother lost her husband. David left his job, his friends, and a very different future behind in NYC to return to Colorado.

At this point, David started to wonder where his life was heading. “I felt like I was back to where I was 15 years ago and thought, ‘Is this what I’m going to do the rest of my life?’” he explains. His response was to enroll in community college, where he found a new outlook and sense of purpose. “A professor there changed my perspective on education because he looked like me and understood my identity and my place in the world,” he says. This led David to a role as an advocate for Latinx students while earning his associate’s degree. He found his passion in promoting equity and inclusion, citing access to education as a key lever than can help break a cycle of poverty for many.

Now pursuing a degree in public service, David is grateful that the scholarships he has earned at CU Denver, including the Reischer Scholarship and the Chancellor Georgia E. Lesh-Laurie Scholarship, allow him to remain fully committed to his passions. “I realize now what privilege these scholarships have afforded me in having an education,” he says. “But with that privilege comes a lot of responsibility.” In addition to keeping busy with his studies and interning with the Colorado Department of Higher Education, David advocates for and mentors other students. He encourages them to take an active role in society, saying, “Make sure to use your voice and be a part of building the systems all around you.” Just as Justice Samour encouraged our graduates, David is already making a difference by giving back to his community–creating a better future for himself and many others.