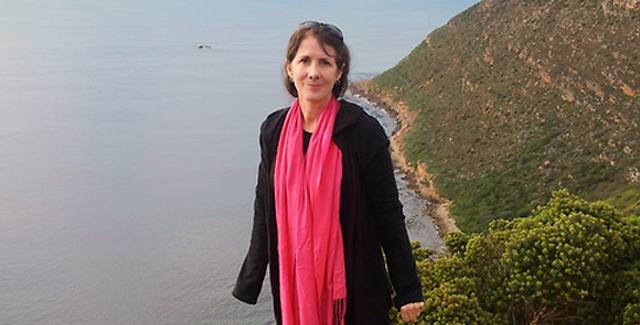 Inside the dusty little shop, she strolls by shelves packed with roots, bark and plant leaves. Behind the counter, she can see rows and rows of tiny plastic bottles filled with different-colored powders. And from the ceiling hang parts of every animal she can imagine—ostrich heads, horse legs, crocodile tails.

Marie Hastings-Tolsma, PhD, CNM, is far from Iowa, where she grew up on a farm. She is far from Colorado, where she conducts research and teaches nurse midwifery. She is in a traditional healer’s shop in Johannesburg, South Africa, where, on a Fulbright Scholarship, she is studying the use of indigenous herbs during pregnancy and birth.

“I was so excited but in total disbelief that I had been selected for a Fulbright Award,” Hastings-Tolsma said. “[The award] is merit-based and highly competitive. Luckily, my expertise and scholarship were a good fit with South Africa and the University of Johannesburg.”

She’s using the award to spend this academic year in South Africa, collaborating with a midwifery researcher at the University of Johannesburg to study patients, traditional birth attendants and midwives throughout South Africa’s nine provinces. She wants to find out which herbs are used most frequently and how those herbs are used. She’ll then send samples of the most frequently used herbs back to the University of Colorado for analysis and comparison with herbs used by women in the U.S.

Touching Down in Jo’burg

Hastings-Tolsma had never before been on the African continent. On Aug. 2, the newly minted Fulbright Scholar arrived at Tambo International Airport, which she describes as “huge, modern and beautiful.” It wasn’t long before she realized that not all of South Africa is modern and beautiful.

“In many respects, Johannesburg seems like any large U.S. city, but crime here is high, as is unemployment,” she said. She summed up the feel of most residential areas as “gated and guarded,” with 8- to 12-foot high walls, razor wire, electric fencing and security guards.

She witnessed, first-hand, the great disparity of wealth distribution in the country when she visited the Nyanga slum outside Cape Town, where approximately 3 million people live in extreme poverty.

“I have seen pictures of such slums but to see it up close left me speechless,” she said. “There are also significant issues related to health care access and coverage. The role midwives play in meeting these health challenges is terribly important.”

Although many people in South Africa use medicinal plants along with prescription medications, some of the herbs commonly used by pregnant women there are illegal, Hastings-Tolsma said. This makes her research more difficult.

“There is reluctance by many to talk about [herb] use,” she said. “In addition, midwives here do not have prescriptive authority, so they are very anxious about admitting use. Further complicating the picture is the belief by some providers and patients that use of herbs is related to black magic.”

Hastings-Tolsma perseveres because of the potential impact her research could have for troublesome—and expensive—pregnancy issues universally, including in the U.S. What she discovers about herbs might help treat both preterm labor and overdue delivery.

With a research end date of June 30, 2013, Hastings-Tolsma’s work in South Africa is only just beginning. Despite her passion for her work, she’s already begun to miss a few things back home.

“Access to U.S. news and consistent Internet access are top on my list,” she said, “along with the convenience of jumping in the car to run where I want to go. Since I do not have a car, I now walk 4-8 miles each day.”

And of course, there are the people she misses.

“I would be remiss if I didn’t mention how much I miss collaborating with research colleagues at CU Anschutz,” she said, “and working with faculty in the Division of Women, Children & Family Health in the College of Nursing, whose support has made all of this possible.”