A Denver Warrior Against Cancer 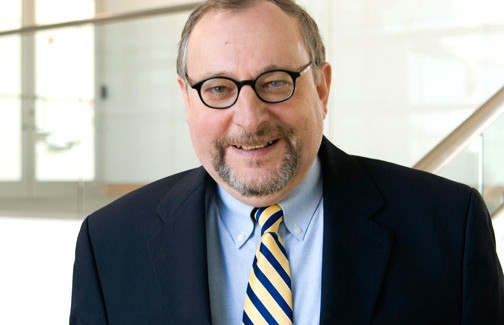 WHEN Dr. Fred Hirsch was a young medical student in Copenhagen, his father-in-law’s premature death from lung cancer compelled him to dedicate the rest of his life to this devastating disease.

One of the world’s most respected lung cancer researchers, the Norwegian native occupies a cramped eighth-floor office at the University of Colorado Cancer Center — and introduces himself as Fred.

Hirsch heads the center’s Biomarker Analysis Laboratory, which “develops and validates biomarkers in order to continually improve cancer patients’ treatment and care,” according to the website.

“Previously, the working principle in cancer treatment was ‘one size fits all,’” he says. “Everyone was treated similarly. Today we have the tools to do molecular profiles of a tumor.

“Based on the molecular features we discover in a tumor, we use specific targeted drugs that have very encouraging results. This is what my lab is working on — trying to identify the right patients for the right therapies.”

Researchers are able to identify molecular features that can be translated into appropriate therapies in approximately 59% of lung cancer patients. The remaining 41% elude this treatment modality.

“There is no treatment yet,” Hirsch emphasizes. “But this piece of the pie is getting smaller and smaller.”

Approximately 220,000 cases of lung cancer are diagnosed every year in the US. While most are related to smoking, the disease is increasing in younger women who have never touched a cigarette.

Since 2005, anti-smoking campaigns, restrictions and legislative measures have resulted in a reduction of 700,000 lung cancer deaths globally. “That’s a 20% reduction in lung cancer mortality,” he says.

“This is not true anymore,” insists Hirsch.

“First it all, it depends on the stage of the cancer (one to four, with four being the most advanced stage). If it’s advanced, I would not consider lung cancer curable, but we have treatments that significantly improve the outcomes — and the potential, the potential, for a cure.”

Hirsch does not mention that the Nazis wiped out his father’s family in the Holocaust or that he was on the receiving end of a harrowing diagnosis five years ago.

Science takes precedence — until he delineates the biomarkers of a very human and fascinating life.

“Norwegian Jews had no warning, no help”

BORN in the small Norwegian town of Trondheim in 1950, Hirsch describes the experience of growing up Jewish in Scandinavia “with mixed feelings.”

Out of the 120 or so Jews in Trondheim, Hirsch’s parents were among the few who kept kosher. “There was no access to kosher food, so my parents had to get kosher food by train from Copenhagen or Stockholm.”

Emotions suddenly overtake his normally calm exterior. He apologizes, but refuses to elucidate their source.

“I certainly appreciated my parents’ efforts to give us a Jewish education and Jewish identity at that time,” Hirsch says. “It definitely wasn’t the Jewish environment you have in the US.”

Alluding without fanfare to the fact that his father, also medically-trained, lost almost every member of his family in the Holocaust, Hirsch lays the historical groundwork.

In WW II, Sweden was officially neutral and Denmark was positively heroic.

The Danish people facilitated one of the largest and most successful rescues of Jews during the Holocaust.

Norway’s government did not merely part company with the political sentiments of its neighbors. Norway openly sympathized with the Nazis.

Vidkun Quisling (his last name became synonymous for traitor) served as Minister-President of Norway from 1942-1945. Nasjonal Samoling, the party he founded in 1933, participated in Germany’s Final Solution.

When the German leadership informed Quisling of its deportation plans, his government heartily agreed. “Norwegian Jews had no warning, no help,” Hirsch says.

“My father was the only one in his large family that lived in Oslo. Some Norwegians helped him escape. He skied over the mountains for days, hid in cottages and finally arrived in Stockholm, where he met and married my mother.

“His family was deported to Auschwitz and never came back.”

Norway’s behavior during the Holocaust left an indelible impression on Hirsch.

He met his future wife Pia at medical school in Copenhagen. They married four years later.

Hirsch earned his MD from the University of Copenhagen in 1977 and later directed the oncology departments at Righospitalet, Bispebjerg and other hospitals in Denmark. In 1999, he accepted an offer as professor of medicine and pathology at the University of Colorado Hospital, now located on the Anschutz Campus in Aurora.

Professionally, it signaled a stellar opportunity to pursue the fight against lung cancer.

Personally, it arrived in the nick of time.

Fortunate to be in the US

AS Hirsch continued ascending the rarefied ranks of cancer researchers — awards and honors line his office shelves — Scandinavia entered into an unofficial war against the influx of foreigners arriving on its shore.

Jews, who lived in the region for hundreds of years, were not exempt. “Scandinavia had a homogenous population,” he says. “It offered a very good life: an organized social order, numerous benefits. Then foreigners started coming here — and that is a good thing.

“And the Jewish people were sometimes thrown in the same basket as the foreigners.”

What began as cultural confusion deteriorated into ethnic hatred.

“The staff made jokes about the Turks, people from the Middle East — you name it.

“Then one day a person announced that he had a ‘Jew party’ the night before. I asked, ‘What’s a Jew party?’ He said, ‘All the guests came dressed as Jews.’”

Shocked by the attitudinal divide between WW II-era Denmark and the current society, Hirsch says “it was a sign. I went to my wife, who was working in the same hospital, and I said to her, ‘I don’t want my kids to grow up in this kind of environment.”

The University of Colorado Hospital contacted him in 1999.

“I won’t say it was easy, but having that job made it a little easier for us to take such a big step,” he admits.

Hirsch, his wife and their three children moved to Denver, where they joined EDOS and DAT. Two of his children are married, and the third will marry this June.

American Jewish life may appear outwardly serene, but Hirsch knows tranquility can evaporate in a heartbeat.

“My kids attended Jewish schools in Copenhagen, and the schools were surrounded by policemen. In 1982, bomb attacks destroyed a synagogue and the El Al and Pam Am offices.

“I grew up in Europe, where anti-Semitism persists. I have learned that I must always be alert. And I am surprised by the visible lack of security in America’s Jewish institutions.”

Then he puts a positive spin on the conversation. “We are fortunate in the US,” he smiles. “We are blessed. Jews can develop and grow and prosper. We can give our kids a good Jewish education. Every time I visit my daughter at Yeshiva University, I get very emotional.

“But we need to be alert. Don’t take anything for granted.”

HIRSCH is a scientist. He also is religious. Does the scientist see G-d at work in the most daunting diagnosis?

“I am a religious man in principle,” he says after a moment’s consideration. “I am also a cancer survivor.”

This time there is no emotion, only hesitancy about revealing such an intimate truth.

Five years ago, he manually detected a suspicious lymph node on his neck. Tests revealed he had lymphoma.

“The news was shocking,” he says. “I did not feel sick. I was in the midst of my career, traveling as much as I do today.

“So I know the situation from both sides of the table.”

Everything cancer patients experience, he experienced — but Hirsch added a significant dose of faith.

“I believe that G-d is part of the treatment,” he smiles. “Definitely.

“I feel blessed; very, very blessed. I’ve never had so much energy. I have never worked so hard in my life. Yes, I’m cured. I certainly hope I am cured!”

Dr. Hirsch escorts his visitor through the building’s labyrinth-like maze, down the elevator, up the sidewalk and points to the information desk ahead.

On the sidewalk, several people wait in the hot sunlight for valets to bring their vehicles.

Bald women talk to other women who camouflage the effects of chemo with bright scarves. A wheelchair-bound man raises his eyes in delight after closing a book.

They probably don’t know Fred Hirsch, who searches for miracles in the sterile confines of the laboratory — but you can recognize his hope in their faces.