Instructors teaching a course in the university core are asked to assess learning for one or more of the core area outcomes and report the results to the Office of Assessment (kennethwolf@ucdenver.edu). The assessment reporting form will take only ten to fifteen minutes to complete. The Core Curriculum Oversight Committee (CCOC) will send you a summary of the findings from all of the courses in your core area to help guide teaching and learning in your core area. 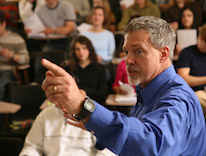 The General Education Assessment Project, recruited 50+ faculty members to re-conceptualize the learning outcomes and design assessments to measure student performance in each of the nine core areas of the general education program. Since then, instructors in the core areas have been administering assessments and identifying patterns in student learning with the intent of using the information to inform teaching and learning in the general education program.

Based on a directive from the CU Board of Regents in 2008, the university was required to administer a Standardized Assessment of Student Learning in General Education every three years. The university chose to administer the ETS Proficiency Profile, which measures student performance in the areas of critical thinking, writing, reading, and mathematics. The​​ tests revealed that CU Denver students are performing on par with or above students at comparison universities, and that seniors outperformed freshmen on the test, suggesting that a CU Denver education makes a valuable difference in students' learning. 2016-2017 ETS Summary Report

Assessment of First-Year Students Knowledge and Attitudes in Civics

One hundred and twenty-three incoming freshmen were assessed through the online ETS "HEIghten Civic Competency and Engagement Assessment" during the fall of 2019. The ETS HEIghten Civic Competency & Engagement assessment is an online test administered in a single 45-minute testing session, with each test taker answering 80 questions from three different areas: Civics Competency, Civics Attitudes, and Civic Participation. (https://www.ets.org/heighten/about/civic_competency_and_engagement)

The results indicate that CU Denver students scored at similar levels to comparison groups on both the Civics Knowledge (Proficient Rating Level) and Civics Attitudes measures.