For Chilli Kellaway '21, CAM’s Creative Centers Bring It All Together 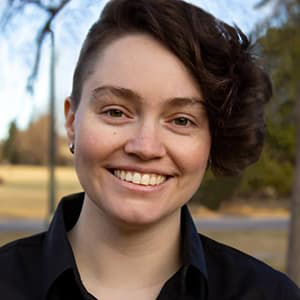 What makes Chilli Kellaway ‘21 an effective storyteller, animator, designer, and even project leader? Their success draws on many strengths—but it all started with teaching children.

“I used to be a climbing instructor and used to teach a lot of kids,” Chilli recalled. “I was also an afterschool enrichment instructor. I have a background in trying to take a lot of new information and make it more accessible, less intimidating.”

This is a lens Chilli brings to storytelling, which they aim to use as a “medium that increases accessibility and knowledge.” They want to use animated stories to relate to people who don’t feel seen in mainstream media and to show that there are many different ways of learning.


Finding a Home in Digital Animation

Chilli’s path to animation began at Colorado Mountain College, where they studied digital media. They were immediately drawn to storytelling and began to experiment with different forms, from writing to video production. But it was a chance encounter with a trailer for an animated movie—Kubo and the Two Strings—that really captured Chilli’s imagination: “It created such an impact with storytelling in a short amount of time. That’s what I want to do.”

They began looking for animation programs and soon discovered the Digital Animation Center (DAC) at CU Denver’s College of Arts & Media (CAM). “I was drawn in by the different short films the DAC produced, which I didn’t see in other animation programs,” Chilli remembered.

“I was also interested in the fact that the DAC had physical labs where you were expected to engage with other students,” they said. “I didn’t see that same sense of community at other programs. We were encouraged to develop not just as an individual, but as a teammate.”


Bringing Together a Breadth of Skills and Experience

Another chance encounter brought Chilli into CAM’s other creative space on campus: the Comcast Media & Technology Center (CMTC), an interdisciplinary hub for creative problem solving. A friend recommended that Chilli explore the CMTC, so they dropped in to meet the staff. In no time, Chilli had secured a job on the center’s Design Innovation team.

Chilli’s work at the CMTC drew on their full breadth of skills and experience—from illustration and graphic design, to animation and 3D modeling, to synthesizing information and making it more accessible. “I was able to use all of my knowledge, not just a portion,” Chilli said. “I hadn’t been able to do that previously.”

Chilli also expanded their skillset and gained exposure to new disciplines. “When you’re doing 3D modeling, you have completely different techniques and programs for different types of uses,” Chilli noted. “I gained a lot of experience with modeling specifically for 3D printing—going into the engineering side of modeling—which was really good experience.”

“I wanted to develop that language in different fields,” they added. “Today, different models, programs, and methodologies have become very easily translatable to me. I can hear explanations from different fields and have a base understanding of what they’re trying to explain and how that can translate to my field.”


Growing as a Teammate and Leader

Above all, Chilli found that their time at the DAC and the CMTC has provided invaluable experiences in teamwork and leadership. “I think I grew a lot as a team leader,” they reflected. “As I got more experience, I had to learn very quickly how to work with my teammates, figure out ways to inspire what they want to bring forth in a project, and keep us on track.”

In multiple ways, Chilli’s leadership roles in 3D design draw on the fundamental skills they learned as an educator—translating complex information into clear, actionable communication.