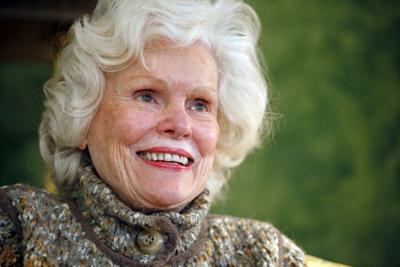 Doris Buffett died yesterday. She was surrounded by family and friends and listening to the music of Billie Holiday.  At 92, Doris had changed the lives of hundreds of people through her philanthropy and established the Center on Domestic Violence.

Doris believed in seeing people as individuals, believing in their capacity to overcome adversity and in her own ability to provide a critical “hand up” as opposed to a “hand out” to people in need. I first met Doris when I became director of the safehouse for victims of domestic violence in Boulder, Colorado.  Though she had since moved to the east coast, Doris had been a volunteer for Safehouse for several years.  She had continued her commitment to battered women, sitting on the board, and working to create comfortable living spaces at shelters in a number of communities.  She would call me occasionally, with a question, “How does Boulder County Safehouse handle staffing issues or How does Safehouse maintain a 24/7 crisis line?” We became long distance colleagues and friends.

So when Doris’ mother passed away leaving her shares of the Berkshire Hathaway stock managed by her younger brother, Warren Buffett, Doris again called. She phoned this time to let me know that she was creating a family foundation, that she planned on focusing support on the issue of domestic violence, and was I interested in coming to work with her. Doris and I spent three years working together to discover innovative ways to support domestic violence victims and the advocates and organizations that assisted them. Through her foundation – the Sunshine Lady Foundation – we established the Women’s Independence Scholarship Fund that provided financial support for survivors of violence to help lift them out of poverty.  We created the Sunshine Peace Awards designed to acknowledge the tireless work of advocates in the field.  And, perhaps most impactful, laid the groundwork for the development of the Center on Domestic Violence.

Doris believed in the ability of education to change lives.  She knew the movement to end domestic violence needed strong leaders in every community across the country in order to make the level of change needed to stop the violence. She chose to invest in building those leaders by supporting the first graduate level educational program in the country focused on gender violence.

Though Doris didn’t stay long with the Center, her philanthropic interests moving on to other critical issues we, at the Center on Domestic Violence, will always be grateful to her for her vision, her willingness to take risks, her belief in our ability to make change happen and for how deeply she cared. Personally, I will remember Doris for her courage, her determination, her sense of humor, and her unapologetic drive to show up in the world exactly as who she was.

Thank you, Doris, for the many gifts you have given our communities. I am endlessly grateful.